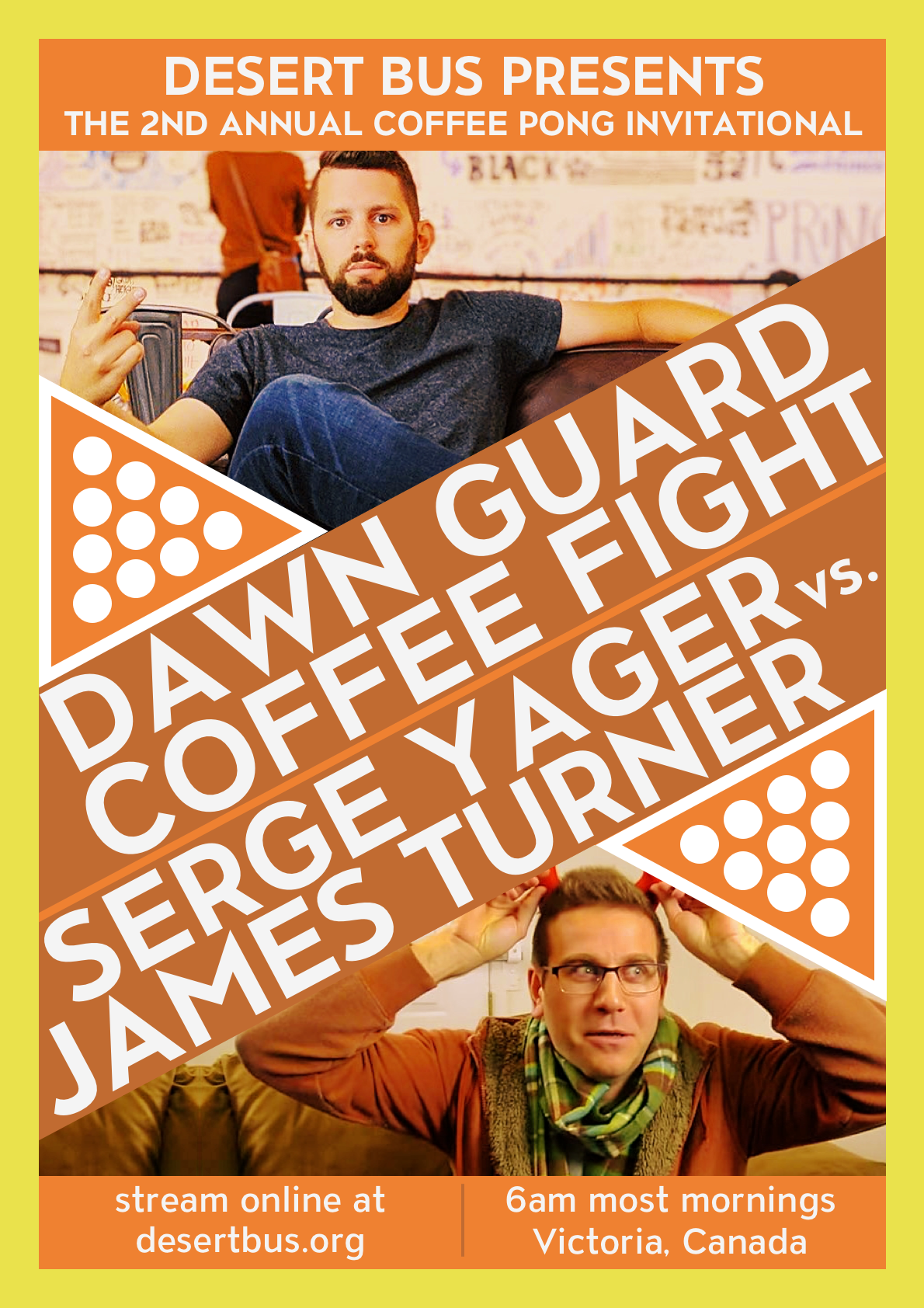 I made the winning entry in a timed art contest for Desert Bus for Hope 2019, a yearly charity event to raise money for Childs Play Charity. I am a wild fan of this event, which is a week-long stream where Loading Ready Run—a Canadian internet comedy group—plays the worlds most boring game to raise money charity. It’s ridiculous, and a lot of fun to watch. I have been watching this every year since I was in high school.

One of the things they often do during the event is daily art and writing contests, with rules set by the people hosting. They’re usually pretty wacky contests. I woke up on Tuesday morning during Desert Bus to find an ongoing art contest to design a poster for the daily Coffee Pong event—you see, they’d play Coffee Pong at the start of the Dawn Guard shift to wake up.

The art challenge rules were, basically:

Since I woke up with the contest already going, I had zero time to plan and just two hours to execute on this.

I did a quick google image search to internalize the design qualities of wrestling posters: big text, a date/time, the name of the promoter + a cool event name, thrilling vibrant colors, large pictures of the main contestants, and so on.

And then...I just went at it in Sketch. I based my color palette to the Dawn Guard shift colors to keep it on-theme. I quickly found two pictures of James and Serge, and did some color shifting and flipping to get them to line up correctly. (I’m quite pleased with the way Serge’s arms line up with the photo frame in the poster—it fits so well in my draft that I couldn’t find a newer image of Serge that I liked enough to replace it.) Once I had the photos and a bit of a poster structure, I iterated and polished and played with the text until everything “felt right”...and sent it off for judging.

Later that morning, I found out I won! I had trouble believing it, but I was very excited to win. I immensely savor my DBloon Challenge Coin prize.

(Oh, I had a last-second quick fix before I submitted: I was so tired while doing this that I didn’t even have my morning coffee yet—I almost sent the final poster with the feature text “Alpha Flight Coffee Fight,” which would have just been plain wrong. “Alpha Flight” is the noon shift name, the morning shift is “Dawn Guard.” Losing the rhyme didn’t break the poster, though.)